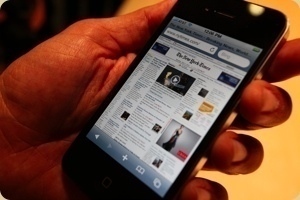 I got my new iPhone 4 today. As little as a few days ago, I didn’t think I’d be getting one, even though I’ve been eagerly anticipating from even before it was announced in early June. I knew that Apple releases a new iPhone each June and that my eligibility for a new subsidized phone, to replace my old iPhone 3G under my AT&T contract, returned in mid-June. And yet, I also knew that there were a lot of other expenses that could easily absorb the same $200 chunk of money.

However, it turns out that my imminent change of jobs will require a cash-out of my current bank of vacation time, which happens to be enough to cover a bunch of what needs to be done plus a little more. And then this Father’s Day, Melanie gave me a card with part of the inscription including one “coupon” good for a new iPhone.

Since I’d missed the deadline to pre-order online in time to have an iPhone shipped to me on launch day, today, as well as to have one reserved for me at the Apple Store, if I wanted one right away I’d have to work a little harder. So I decided that it would be fun to do the fanboy standing-in-line thing at my local Apple Store at South Shore Plaza in Braintree. The fact that the place is nearly across the street from my office helped with that decision. The store opened for iPhone sales at 7am and the mall opened for the line to form inside at 6am, so I decided it would be safe to get there an hour earlier at 5am. Whew it’s been a long day.

I spent a nice couple of hours chatting with the other folks in line and speculating as to whether there would be enough phones for all of us. I was about the 40th person in line for the walk-ins and I hoped that would be enough. The Apple employees were unfailingly helpful and cheerful, greeting people by name, “introducing” them to their new iPhones, answering questions. They assured those of us in line that if at any point they thought they would run out of phones before everyone got inside, they tell people so they didn’t have to wait any longer than necessary.

The purchase process was quick and painless. I was in and out in 10 minutes with a fully activated iPhone 4 in my hands. Back at the office, I backed up my old iPhone 3G for the last time and then plugged in the iPhone 4 to have all my files transferred over. That took about 20 minutes max.

My general impression is that the so-called Retina Display on the iPhone 4 is as good as advertised. It does indeed look like whatever the screen is showing is printed on the outside of the device. The images are bright and crisp. I wish my MacBook Pro had the same screen.

The iPhone itself is very speedy, especially compared to my old iPhone. Apps snap open and are less crash-prone and more responsive. New apps like iMovie are a dream to use. Imagine editing a video right on your phone! Incredible.

Multi-tasking is also amazing. Apps stay running in the background rather than closing and having to re-open. Not having to wait for a tweet with image to finish sending before closing the Twitter app will be great.

I’m still trying everything out, including features that were in last year’s iPhone 3GS that I didn’t have in my iPhone 3G. It’s like leaping ahead two years instead of one. So far, I think it’s a great little machine.

Now imagine when the iPad gets the Retina Display…. I’m going to start saving my pennies now.