Ever since I saw this Ikea hack mail rack linked at Lifehacker.com back in February, I knew I wanted to build one for myself. (In case you don’t know what an Ikea hack is, it’s the combination of various products purchased at the giant discount-price Swedish home decor retailer, Ikea, in unexpected or unintended ways. There’s even a whole blog dedicated to them.)

I primarily wanted to replace the mail-catching basket we had by the front door. We have an antique telephone table I inherited from my mom, on top of which is precariously perched a basket containing way too much mail. (I do a cursory sort as I come in from work each day, tossing out junk in the recycling basket set there for the purpose and putting the rest in the basket, but too often that’s where it stays in a giant heap.) Because it’s so top-heavy, the kids are always knocking it over, sending the mail flying all over the living room.

Ikea hack to the rescue! We were going to Ikea today to pick up a mattress for Anthony to sleep on in his new room (cf. previous post) as well as various other items like a lamp, a shelf, and what not. I remembered the hack I wanted to build, so I looked up the clipped Lifehacker article in Evernote on my iPhone and picked up the necessary materials. You can see the complete instructions at the first link above, but here’s how it went for me. 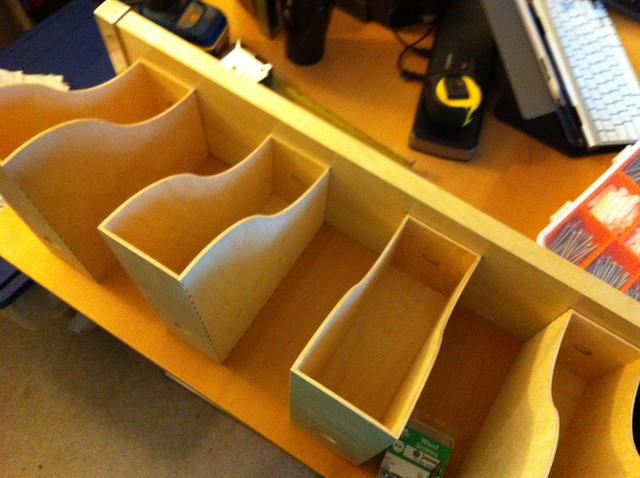 The original hack called for using three of the Ikea KNUFF magazine holders and some spare wood to make an impromptu shelf. The KNUFF come in pairs so I decided to use four. I also opted to buy a new shelf, the EKBY JARPEN/EKBY BJARNUM combination, for a more polished look. Since it was a little longer than the original hack’s shelf, it could hold four KNUFFs pretty well. The original hack also opted to stain the shelf and magazine holders, but since the Ekby shelf was already a birch veneer, I left the Knuffs untreated. We’ll see how that works out long term.

I started by laying out the four Knuffs under the shelf on my desk, spacing them equally and then marking their left and right edges on the shelf bottom. 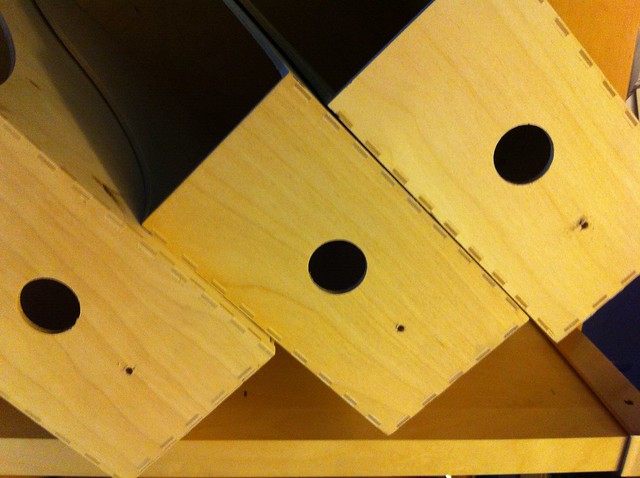 The next step was to drill pilot holes for the screws in the short side of the Knuffs where they would attach to the shelf. Then I would hold the Knuff in position against the shelf and mark the spot for the pilot hole there through the hole in the Knuff. Everything went well until I realized that my big hands just didn’t fit well into the Knuffs. I’d already drilled all the pilot holes in them, but I had no choice. More on that in a second. 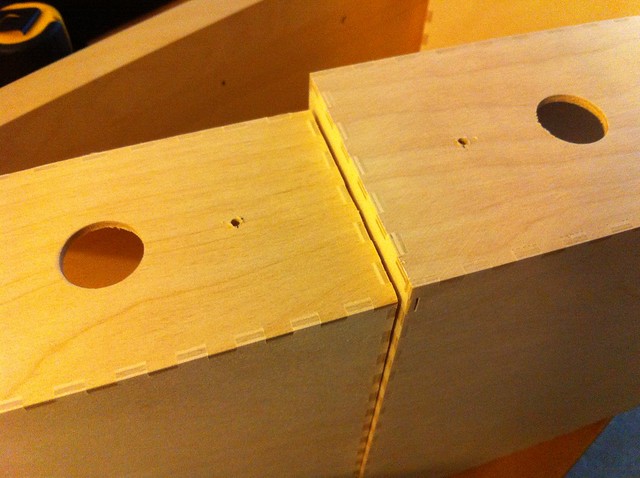 My other immediate discovery was that there is a wide variety in the relative size of the Knuffs. While the pair in each package were the same size, those from different pairs varied in both width and depth. If you attempt this hack, it might be worth keeping that in mind when shopping and try to find pairs that are alike. In my case, I just made sure to place the thinner ones on the outside and the thicker together inside and so it looks okay. 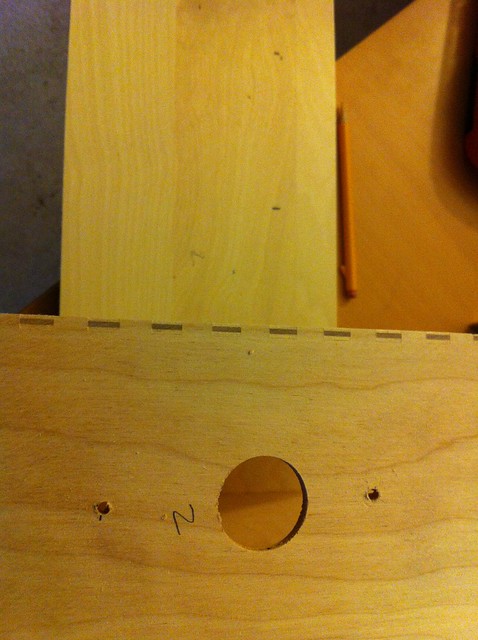 I made sure to number the KNUFFs as well as their place on the bottom of the shelf since each pilot hole and placement of the KNUFFs was to be unique. Wouldn’t do to lose track and try to figure out which was supposed to be where while in the midst of putting it on the wall. 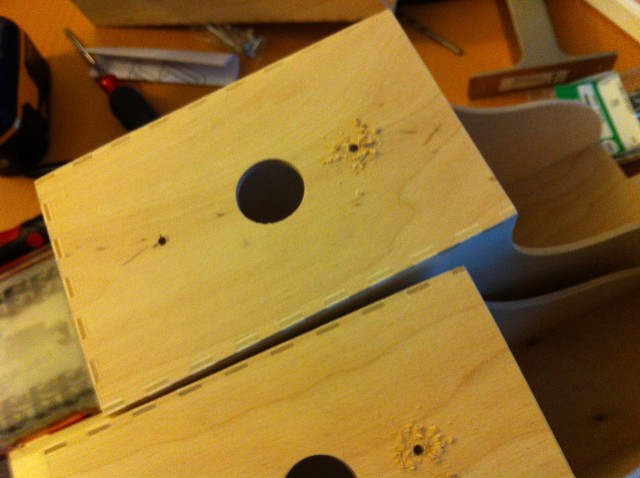 As for my pilot hole problem, I went back and drilled a second hole in each KNUFF, closer to the opening into which I could fit my hand. 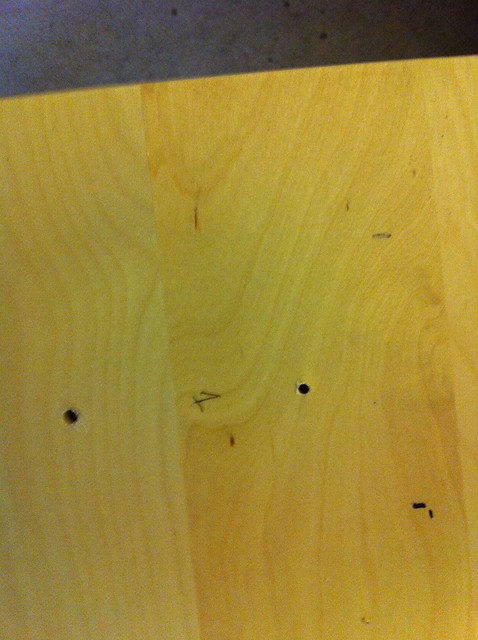 You can see here that I ended up drilling two pilot holes in the bottom of the shelf for the first box. That’s why we do dry runs! Otherwise I would have done a lot more unnecessary drilling. 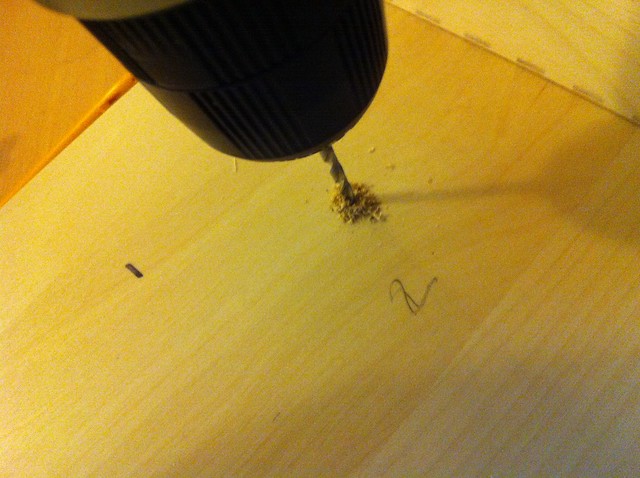 Of course, when drilling into the bottom of the shelf, be sure not to go all the way through. That would be bad. Not “crossing the streams” bad, but still bad. 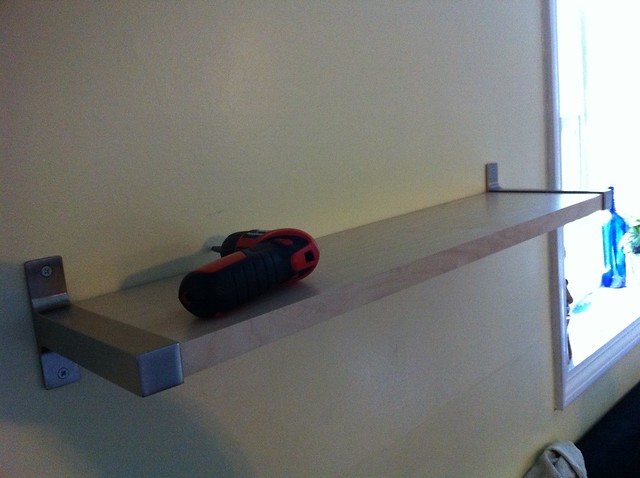 Once all the pre-assembly and testing and dry runs were done, it was time to put everything in place. First I put up the shelf as per the instructions. It was a tiny bit tricky because I wanted to avoid both a light switch’s and an electrical outlet’s wire runs. I ended up a tiny bit further from the door than I wanted, but that’s okay.

After the shelf was in place, I screwed the Knuffs into the bottom of the shelf with regular wood screws and then screwed them to the wall as well. I didn’t use anchors or anything because I don’t expect them to be load-bearing. It’s just for basic stability. 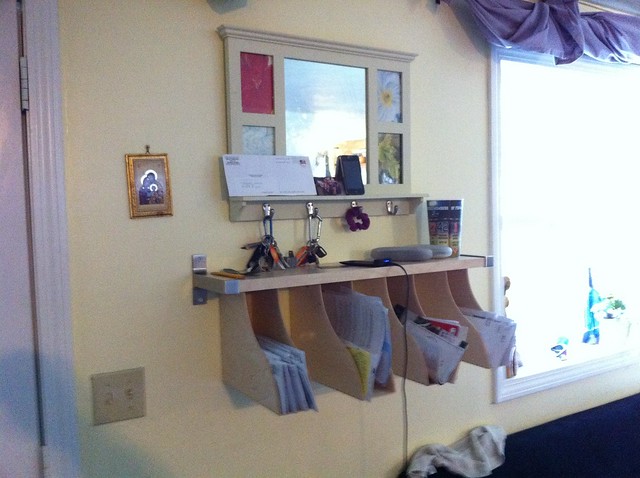 Here’s the final result. The mirror with key hooks was there before, but I had to move it higher up the wall. But now I have four sorting bins for bills; needs-to-be-scanned; magazines, Netflix, etc.; and needs-to-be-shredded. Everything else goes right into the recycling bin. Plus there’s room on top to plug in a phone or Kindle or iPad for recharging and space for outgoing mail.

I am curious to see how long it lasts. The Knuffs are not made of very tough material so the first time a child grabs the bottom of one of them to keep from falling or as a climbing handhold, it’s going to come apart. One other consideration is that I might bore a hole up through the shelf to run the charging cables. I have one of those outlets with USB power ports on the wall down below, so it makes a great charging station by the door. So that’s it for now.

What modifications would you have made to the hack? Would you build one of these?