Memorial Day at the farm

We went to Ward’s Berry Farm in Sharon, Mass., today at the explicit request of Isabella, who asked yesterday to go see the “aminals”. We’d been a couple times before and she’s become enchanted with the animals in the 4-H barn, which include goats, sheep, ponies, rabbits, chickens, and ducks. 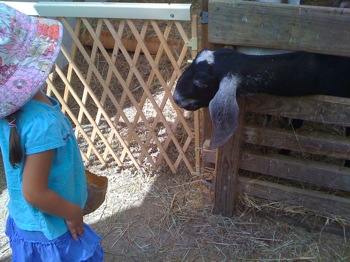 Isabella shows no fear around the creatures or almost any creature for that matter. She runs right up to pet them or pick up scattered feed from the ground to let them lick it off her hand. I suppose because she’s never been nipped by them, she has no fear yet. The farm sells little bags of feed for a buck apiece and because I felt awkward letting her feed the animals off what was scattered on the ground, I bought her a bag. 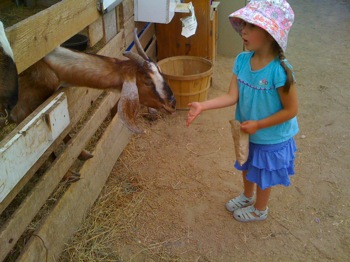 Bella was in heaven, running from one animal to the next, barely stopping to dole out a handful of food to one animal before she was on to the next pen, making several circuits of the place. Meanwhile, Sophia was content to stare at the rabbits and intone in a happy voice, “Bunnies! Bunnies!” Although, I did get her to hold out her hand long enough to let the goats lick up a handful of feed in one big wet swipe of a tongue as big as her arm. Ben was pretty unconcerned by the whole business, but he was still groggy from falling asleep in the car on the way down. 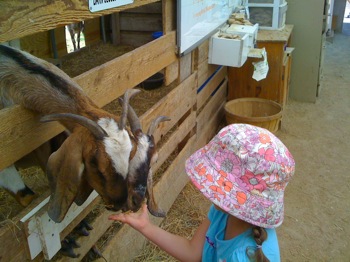 My sister-in-law Teresa and her boyfriend Joe came along as well and they stopped in the farm store to pick up some fresh-picked strawberries, cheese, and crackers, which they nicely shared with the kids. From Ben’s face, he was wondering what this wonderful fruit was and why did we call it the same word as that pale imitation we’d been buying at the supermarket.

Eventually, we loaded up the kids and headed home where we had a difficult time getting anyone to nap, except for me who fell asleep like the dead for an hour. Then we had a nice traditional Memorial Day meal of hot dogs, black bean and corn salad (we were out of baked beans), and watermelon.

But we never forgot to recall those for whom the day is kept. The Pioneer Woman has been marking the day with photos with the theme of homecoming and showing our servicemen and woman coming home. This one struck me as embodying the meaning of Memorial Day in both the sacrifices of those who gave their lives and those they left behind.

God bless them all.