How I learned to love sushi when I stopped eating like an American
2 comments
Share:FacebookTwitter
Cooking, food and drink 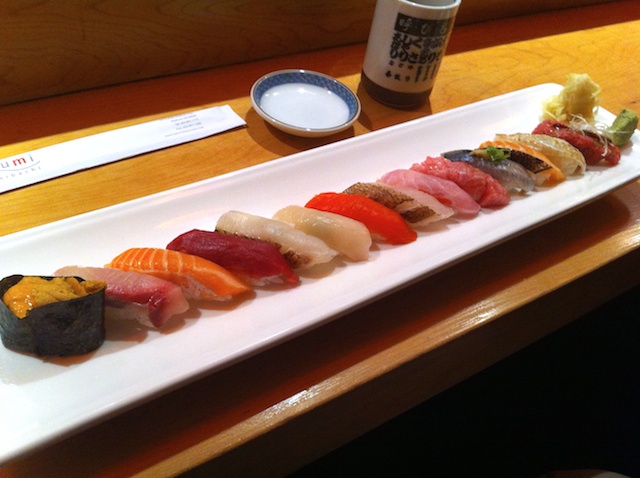 [lead dropcap="yes"]I have loved sushi for many years, which – if I could go back in time – would shock my 10-year-old self. I hated fish of all kinds[1] and couldn’t choke it down even with all the milk in the world. I hated the texture, I hated the taste, and I hated worrying that I would choke on a little sliver of a bone.[/lead]

It turns out I didn’t hate fish. I just hated the way my mom cooked fish. (Sorry Mom). Because when I finally tried sushi as an adult in my twenties, it was a revelation and yet I still hadn’t quite reached the pinnacle of my love for sushi.

In the first few years I lived in Salem after graduating from Franciscan University of Steubenville in the mid–90s, every Friday I went for lunch at a little Japanese restaurant across the street, Asahi.[2] I couldn’t get enough of it even though it strained my meager budget to go regularly. That love for sushi hasn’t waned either as Melanie and I still go out for sushi whenever we can, and when she’s not pregnant. Even so my appreciation for sushi has grown even more recently when I stopped eating sushi the way most Americans do.

I know: That sounds really pretentious, but let me explain. Most Americans–and I was one of them–eat their sushi like they eat most of their other food: lots of flavors melded together covered in sauce. They love big fancy rolls with lots of things in it, drenched in some kind of strong sauce like spicy tuna rolls. They’re lucky if they ever actually taste the fish in the sushi.

That was me. I would always order the milder fish on the menu, the ones without strong fishy tastes, as well as maki rolls with spicy sauce. And when I would get simple sushi, I would dip it in a soupy concoction of soy sauce and wasabi, a pungent combination guaranteed to burn your tongue and nose so you can’t smell or taste anything.

Japanese sushi isn’t like that. In Japan they don’t dip their nigiri (sushi consisting of a bit of fish sitting on top of a small ball of rice) in soy sauce and they certainly don’t slather them in wasabi. They actually want to taste the fish. One of the original kinds of sushi is called saba, which is basically just mackerel. Mackerel is a strong flavored fish, it’s flesh has more oils and it tastes very much of the sea. I have come to love it, just as it is.

My understanding is that the goal of much Japanese cuisine is to allow you to taste the individual ingredients in your mouth. While Western taste buds like when lots of flavors melt together, Eastern taste buds prefer to keep them distinct and separate so that you can taste each. And taste them I have. The more different, the better. For me, sushi has become an adventure of finding some new flavor, a new fish, a new experience.

I’ve had some amazing sushi, some of it in San Francisco, some of it in Nashua, New Hampshire, of all places, and all because I stopped eating the same old “fast food” style American sushi and sought out the real deal. I heartily recommend it.

I also recommend, if you’re interested in learning more about sushi and its origins and how it’s developed in the US, the book The Story of Sushi: An Unlikely Saga of Raw Fish and Rice

by Trevor Corson. He’s a man who knows his sushi and knows how to tell a story.