Ladies, this is why guys are like that
Share:FacebookTwitter
Marriage, Family and ParenthoodSexuality 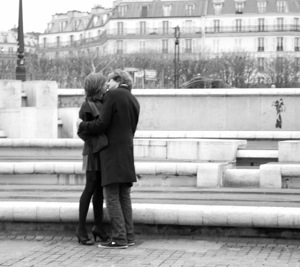 “Why do guys do that?” As a married man with single female friends, it’s a common refrain, often delivered in an exasperated voice following a sad tale of some guy being generally obnoxious. Usually the guy is clueless to his bumbling ways, but it’s always about a guy trying to romance her. Often, he’s being creepy by being too forward, moving too fast, showing up in unexpected places, or assuming too much. I know this because I was that guy once. (I’ve told the embarrassing tale of my first “date” with my wife often enough; I’m moving on.)

So “why do guys do that?”, meaning whatever action is driving the object of his affections away. Well, I’m here to tell you ladies, that we do it because you told us to.

No, not you specifically, but you generally. As in, the fairer sex. Just when did you tell us? In the only places we get exposed to it these days: Romantic comedy and drama movies and TV shows. You know what I’m talking about. There’s Chris O’Donnell, brooding and good-looking, and he’s alienated the leading lady, say, a fetching and endearing Minnie Driver. So he either shows up unannounced at her house with a massive gesture of a gift, say a bouquet of flowers that would choke a horse. Or he sweeps her off her feet to some romantic moment manufactured by him, a candlelit dinner on a rooftop overlooking the sunset over the bay. Or she comes home to a family reunion she was dreading, one in which she anticipates the inevitable “why are you single?” questions, and he’s already there, like one of the family, fitting into her life so perfectly. And later on, in the moonlight, they walk and talk and he stops to kiss her. She resists at first, but then gives in to his advance. Cue the violins.

Admit it, ladies, for just a moment, you swooned. Maybe a little. (Okay, Melanie, I know you didn’t, but let the other ladies admit the moment.)

This is what Hollywood has been shoveling out for decades as the ultimate perfection of romance. And generations of men, dragged to these movies by girlfriends, have seen the women they’re with swoon over the saccharine seductions and become convinced that this must be what women want. And so they try it out with disastrous results. Show up up unannounced and hang out with the intended paramour’s family and you’ll be labeled a stalker. Try to force that kiss on her and you’ll be explaining to the nice police officer that Chris O’Donnell did it and Minnie swooned. The problem is none of us are Chris O’Donnell or Matt Damon or Brad Pitt or all the rest of the romantic leading men. And, ladies, be glad we aren’t.

Now, I’m not excusing the dumb and sometimes downright creepy antics of some of my brothers out there. We should all know better than to think that anything we see on the big or small screen in any way reflects the way people do or ought to behave. But we’ve been conditioned.

So while I’m not saying you ladies should excuse creepy or disrespectful or forward behavior from men who seek your affections, especially when his attention is unwanted, I’m just saying, realize what generations of silver screen romance have wrought in our relationships, false expectations and manufactured moments and all.

N.B. Melanie also reminds me that it doesn’t take much to encourage a guy in the first place. Melanie tells me that when she was in college she would go out to a bar with friends, and some guy would start chatting her up. So being shy and polite, she’d listen and smile, in contrast to all the women who take sport in crushing male egos by not even giving them the time of day or only wanting to talk about themselves. The men would take this as a sign of interest by Melanie and hit on her and ask for her number, when really all she wanted was for the creepy bar guy to leave her alone so she could hang out with her friends and then go home to curl up with a good book.

So that’s another reason guys do “that”. Men are like puppies in that way: Show him some interest, be nice to him, don’t talk just about yourself and it must be a sign that you’re into him. I’m sorry but it’s rough out there in the dating trenches and they’re generally shell-shocked.