It was a Thanksgiving miracle!
Share:FacebookTwitter
Personal

It was a Thanksgiving miracle! 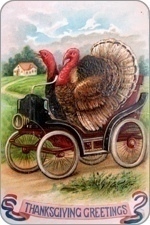 It was a Thankgiving miracle! Well, not really, but a combination of serendipity and generosity saved Thanksgiving for the Bettinellis. As I said in my previous blog entry, our family-wide flu outbreak this week put a dent in our holiday plans.

We’d been intending to go to my oldest brother’s house, as is traditional, for dinner on Thursday, but on Monday we decided we couldn’t go. His wife runs a daycare and it wouldn’t do to bring the sickness into their house. Unfortunately, that left us without a backup plan. Melanie had already purchased a frozen turkey for the freezer, but there was no way we could defrost it in time. And we were too sick to contemplate venturing out to the madness of the grocery stores on Tuesday and Wednesday. Even more than the loss of the traditional meal, we were disappointed we wouldn’t be with family on the holiday.

But then on Thursday morning, as we watched the Macy’s Thanksgiving Day Parade in our pajamas, my other brother called. His family usually does Thanksgiving dinner on their own just because of the number of them (Mom, Dad, and six kids). One of his sons had had a fever the night before and so if a bug were going to hit their household we wouldn’t be the ones bringing it in so would we want to join them for dinner? Thinking fast and in gratitude, we said Yes, thank you!

However, warm thoughts of turkey and stuffing were tempered by the realization that the girls were especially tired and listless and we just couldn’t make them miss their desparately needed naps in order to make the 2pm dinnertime. Even though we arrived late, at 4pm, we still got our traditional dinner with all the trimmings and our kids got to spend plenty of time with their cousins.

Then my mom and my older sister came back my oldest brother’s house with leftovers for us to take home. And boy do I mean leftovers. Giants bags of turkey meat and big pans of stuffing, green bean casserole, and the like. It’s not a surprise that they had leftover turkey; my sister had cooked a 42-pounder. That’s not a typo. Our cousin raises turkeys at her place in New Hampshire, about a dozen or so per year, and this year they ranged from 36 to 49 pounds. It wasn’t dry either as my sister brined the monster in her 54-quart cooler and then cooked it in her oven after removing all the racks and even the side rails for the racks and putting the pan on bricks that kept it just above the heating element.

Anyway, in the end, we were able to have Thanksgiving dinner, be with family, and give thanks for all the wonderfulblessings we have. Not least of which is a family that so generously reaches out to us in need.

N.B. Unfortunately, Melanie’s sister, Theresa, who lives with us was unable to come. On top of the emergency appendectomy of last week, she got the same flu the rest of us did. You can imagine how much that laid her out cold. But she was very happy to see the big pans of leftovers come home with us.