How I Work in 2018
Share:FacebookTwitter
MemoirTechnology 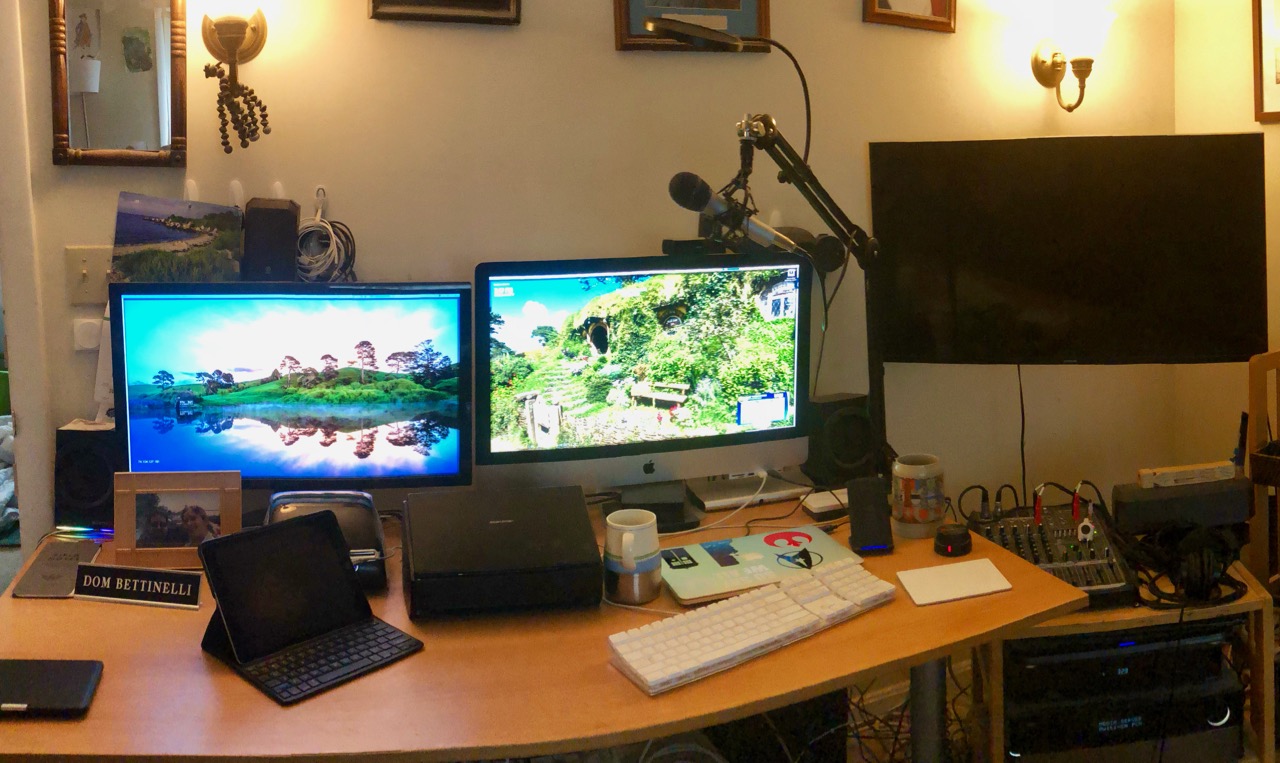 [lead dropcap=”yes”]It’s been three years since I first did a “How I Work” blog post (at the prompting of Tom McDonald) and since then I moved to a different full-time job and then to another (current) full-time job, where what I do is now almost completely different. And where I work has now shifted to my home office. So, I thought it would be fun to do an update of that post now. Some of the details have not changed, but I will share those that have.[/lead]

South of Boston, still, but in a different town. I work from home in a room we’ve set aside as the office, but which is also our primary library and the TV room, so occasionally, usually when the weather’s too bad outside or the kids are sick, I have to vacate and work from another room in order to let the kids watch a video.

I am now the CEO of the StarQuest Production Network (SQPN), a podcast network whose show explore the intersection of faith and pop culture. I first became connected to SQPN as a listener more than 10 years ago when I started listening to Fr. Roderick Vonhogen’s podcasts and then to other shows on the network after it was formed about 2006. In 2010 and again in 2013, I helped organize SQPN’s Catholic New Media Conference when it was in Boston. Around the time of the second CNMC Boston, Fr. Roderick asked me to co-host the Secrets of Star Wars podcast with him. Later, I also joined the Secrets of Doctor Who in 2014. I became a part-time executive director in 2015 and then as of January 1, 2018, Fr. Roderick stepped down as CEO and I took over, first as part-time, and then on May 1, I took on the job full-time.

One Word That Best Describes How I Work:

The keyboard is a pre-2007 vintage Apple Keyboard that I replaced my Magic Keyboard with because I prefer the solid key travel of the older keyboard.2 I also use the awesome Apple Magic Trackpad. I swore off mice several years ago when I realized that my hand stopped cramping when I used the trackpad instead of the mouse.

What Apps/Software/Tools Can’t You Live Without?

I won’t rehash everything I said last time because most of it still applies, although the reason Creative Cloud is indispensable has changed. In 2015, it was because of InDesign and Photoshop for creating bulletins and web site graphics. Today, I spent most of my CC time in Audition, editing podcasts.

The last four are new to this list. Forecast didn’t exist in 2015 and I would haven’t needed it then anyway. It’s a great podcast encoder that takes the big uncompressed audio files that come out of Audition and compresses them down to a manageable size. But that’s not all: It also has smarts in it to identify the audio file and embed the proper artwork, title, and description in the final file. It saves me multiple minutes per podcast as well as eliminates the need for several other programs.

Ulysses is my multi-platform Markdown text editor of choice with plenty of the features I want and no extraneous fluff, plus I can publish to my blog right from within the app, no extra copying and pasting needed. Keyboard Maestro is an incredible automation system that lets me trigger complex scripts with a key combination, at a particular time or interval, or even when it detects a particular piece of equipment has been attached. TextExpander is another automation tool that lets me type a small string of text and it expands it into boilerplate text. For example, every time I upload a podcast file to our online storage, I have to type the same information with a few changing bits. So I invoked the TextExpander snippet, fill in a few fields, and everything fills itself into the proper fields.

You can see in the photo how my desk is setup. The desk is an Ikea Galant3 that is 63” long by 31” deep.I like to have plenty of space to spread out and work. In front of me is is the iMac with the MacBook Pro usually closed and connected to hard drives and power in front of me, ready either to be opened and used or grabbed to go. Next to the laptop is my Scansnap ix500 sheetfed scanner into which every piece of paper that comes into the house and needs to be preserved is fed to go into Evernote. Next to that is my Dymo Labelwriter 450 Twin Turbo with both address labels and e-stamps so I never have to go the post office for the very occasional letters I need to mail.

The microphone boom stand is the Rode PSA 1 Swivel Mount Studio Microphone Boom Arm and the microphone is the very reasonably priced and surprisingly high quality Audio Technica ATR2100 USB/XLR. That is connected to the Mackie ProFX8v2 USB mixer that is on the old TV stand to the right of my desk. Above that is our TV which is mounted on the wall. To the right of those is a bookshelf with a 24-port Ethernet switch, my Synology DS216+II network-attached storage RAID with 3TB of storage and Buffalo TeraStation 4TB RAID.

The phone stand is a Seneo Wireless Charger, which is great for keeping my phone topped up all the time. The speakers are Creative Sound BlasterX Kratos S3 2.1 speakers connected via USB. On the wall behind the computer and display are a bunch of 3M Command hooks that hold cables and headphones and even the speakers for the TV sound system. I particularly like the Cord Organizer. Also on the wall is my Amazon Echo Dot in a wall mount, which I use to control all sorts of home automation stuff, including the lights in this room.

My desk chair is the ErgoChair 2 from Autonomous. It’s not as expensive as the high-end quality desk chairs you can get, but it is very adjustable. I did have a problem where the caster sockets broke earlier this year, but they sent me a new base to replace it. I do sit in this chair most of every day.

Here are the home screens of my iPhone and iPad:

I’ll go for a different hack than the one I gave last time. I picked this one up from Dr. Drang a while ago and it uses Keyboard Maestro. Essentially, wherever I type the letters “xfurl”, Keyboard Maestro runs a script that puts the URL from the current tab of frontmost window in Safari in its place. This is very helpful when I’m doing things like writing a blog post, for example. If I have a page I’m referencing in Safari, I don’t have to switch from Ulysses, click in the address bar, copy, switch back, paste. It all happens right there. A similar macro lets me pick from the list of all the open tabs in Safari. And it wouldn’t be difficult to adapt if Chrome is your preferred browser. See what exactly how it’s done in this blog post.4

It’s still Omnifocus, which only gets better as time goes on.

Besides Your Phone And Computer, What Gadget Can’t You Live Without And Why?

I love my third-generation AppleTV. When they added apps a few years ago, it changed how I use the AppleTV and it is now the primary interface for how I watch movies and TV, especially since I can watch Netflix and Amazon Prime TV on it.

What Everyday Thing Are You Better At Than Everyone Else? What’s Your Secret?

It’s still pretty much the same skills as I said before. I’m not a great typist per se, but I think the ability to type one thing while having a conversation about something else with another person is still pretty cool and unusual.

What Do You Listen To While You Work?

What Are You Currently Reading?

Right now, I’m reading Tom Clancy: Line of Sight (A Jack Ryan Jr. Novel). When Clancy died a few years ago, they had other writers take up his characters to continue their stories, Mark Greaney had been doing a very good job, but they recently switched the Jack Ryan Jr. books to author Mike Maden. I’m not done with the book yet, so it’s not a proper review, but in general, I don’t feel like it hits the buttons. It’s missing a lot of the flash that made the previous novels good and his Jack Jr. doesn’t quite feel the same.

Next on my reading list is S.M. Stirling’s Black Chamber, an alternate history of a fictional second term for Teddy Roosevelt and World War I. I’m also looking forward to Bunker Hill: A City, a Siege, A Revolution by Nathanial Philbrick.

What Has Changed Over The Years Since You Started And What Do You Do Differently?

In one way, a lot has not changed, which is that I’ve returned to working from home full-time, except now I’m not alone in the house, but have my wife and five kids outside my office door. So much of the technology has changed for the better and in fact, there’s no way I could have done this job the way I am 25 years ago, or even 15 years ago. The tools just didn’t exist in the affordable and accessible way they are now.

However, the essential aspects of how I work haven’t changed. I still have to be very disciplined about keeping track of my projects, tasks, and to-dos. I still have to sit down at my desk every day and avoid distractions and temptations. On the other hand, I’m still relaxed about finding space in those obligations to be spontaneous and pop outside for a while to enjoy the weather or take in a matinée or go to a museum with my family.

Now that I’ve once again given up the grind of the daily commute and no longer have to account for my every working moment, I’m much more relaxed and more free of stress and happier. And so are Melanie and the kids. Melanie loves that when my work days I’m right there to help with dinner. The kids love that they can see me all day, that I can help with their schoolwork, or have lunch with them. It’s a better life.