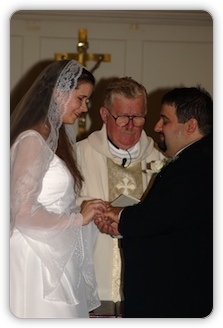 Maureen Dowd (yes, that Maureen Dowd) has a column today which is essentially a long quote from a 79-year-old, Australian-born New Jersey priest on how women should judge whether a man would make “An Ideal Husband”.

While some of the advice is sound, some of Father Pat Connor’s snark is a bit off-putting, e.g. calling St. Paul a mysognist; is Father just pandering to his audience? I’m just a little tired of the de rigeur man-bashing. Yet, there is some worthy advice there for single women. I wonder, though, whether he has similar advice for men on finding the ideal wife.

He is right to counsel women to not let infatuation cloud their judgment. Same goes for men. Too many folks make bad decisions because they think the emotion of the moment trumps practical and level-headed decision-making.

“Never marry a man who has no friends,” he starts. “This usually means that he will be incapable of the intimacy that marriage demands. I am always amazed at the number of men I have counseled who have no friends. Since, as the Hebrew Scriptures say, ‘Iron shapes iron and friend shapes friend,’ what are his friends like? What do your friends and family members think of him? Sometimes, your friends can’t render an impartial judgment because they are envious that you are beating them in the race to the altar. Envy beclouds judgment.

The advice I would add is to be realistic, a trait in Melanie for which I am very grateful. By that I mean, be realistic about the sort of person you’re likely to marry. In this mass media culture so many people have been conditioned to believe that it’s possible some movie star or model is going to fall for them. They’re not. And good for us. Nobody leads a sadder life than celebrities.

Our standards of beauty have become very skewed. The fact is that most people are “average” looking, but there’s nothing wrong with that. Beauty is not just about skin tone and muscle and clothing measurements. I’m not just talking about the “She’s got a nice personality” cop-out either. Certainly physical attraction is important. But if you just open your eyes and shed society’s standard measures, you’ll find a lot more beautiful or handsome singles out there.

Interesting that Father doesn’t say that Catholics should only marry Catholics, etc., but only that “his goals and deepest beliefs [are] worthy and similar to yours.” I’ve known Catholic and Protestant couples who’ve had very successful marriages because they both took their faiths seriously and held similar beliefs, e.g. an openness to life. But religious adherence alone is not enough, Father Connor says, recalling that a marriage he knew between a very pious Catholic woman and a very pious Muslim man was doomed from the start because of the incompatibility of the faiths.

Are the standards strict? Sure, but when you take this decision seriously and you realize that you’re making this bond for life, then you should take your time making it. Certainly, it should take longer to decide on a husband or wife than it does to buy a car or a house.

On the other hand don’t be unrealistically strict. The right man or woman could be there under your nose all the time, if only you took the time to get to know them and to consider them in an unprejudiced light. Don’t rule anyone out too hastily.