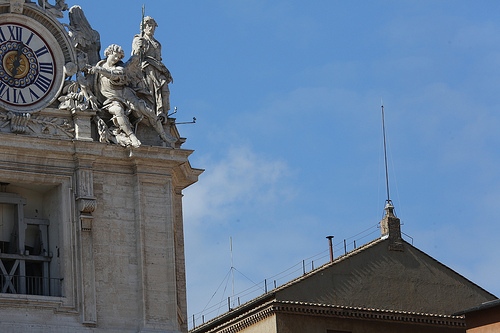 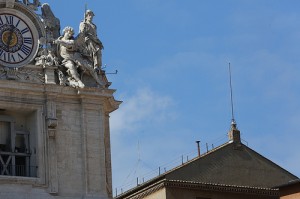 Now that the date for the conclave to begin has been set, next Tuesday, March 12, people are trying to figure out how they can be sure not to miss the black smoke/white smoke.[1] Even though this is the first social media conclave and the moment a puff of smoke appears out of the Sistine Chapel’s Chimney, Twitter and Facebook will explode with updates, even that’s not enough.

So there have been some enterprising folks who have set up services for us, including PopeAlarm.com, brought to us by the Fellowship of Catholic University Students, which promises that they have a team of people scouring news media around the clock so that when white smoke appears they will send you an email and/or text message. Of course, it’s not really around-the-clock since there are only 4 ballots per day by the cardinals, all occuring all predictable times, but you get what they mean.

And of course I signed up for the service. Unfortunately, I don’t check my email consistently and if my phone’s on vibrate (as it usually is) I don’t always feel a text come in. So I took some extra steps.

First, I turned to the awesome Internet toolkit that is IfThisThenThat.com (or IFTTT, for short). This site takes advantage of programming interfaces that many web services open up to allow third-parties to do cool things and so it lets you string conditions and actions together to do things. For example, every time I post an Instagram, automatically save it to my Evernote notebook. If the weather is going to be rainy today, send me a text message to take an umbrella. If I star an email in Gmail, send it to Evernote. When my Facebook profile picture changes, change my Twitter profile too. You get the idea.

So what I did was set up an IFTTT “recipe” that when I receive an email from noreply@popealarm.com to actually call my phone. (IFTTT can robocall your telephone.) 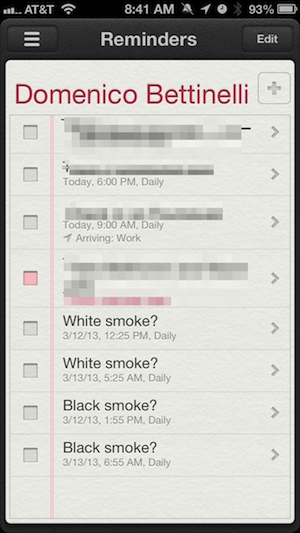 This is great, but what if my phone is on vibrate. Same problem as the text message. Okay, so I’d already jailbroken my iPhone.[2] Using an app called RingerX, I set up the IFTTT phone number as a contact and set it to ring no matter what, even if it’s on vibrate. To top it off, I added an obnoxious Klaxon alarm ringtone.

Even then I didn’t feel it was enough. Based on the Vatican press office’s schedule, I knew that there were four times per day I needed to be watching.

When the balloting is unsuccessful — no candidate reaches the 2/3 votes needed for election — two votes are taken in the morning and two are taken in the afternoon.
The two morning or two afternoon ballots are burned together, so there are only two smoke signals a day.
The first smoke signal can be expected about 7 p.m. Tuesday, after the first vote. Beginning Wednesday, smoke would be expected at about noon and again about 7 p.m.
However, if a pope is elected on the first ballot of the morning, the white smoke would billow forth between 10:30 a.m. and 11 a.m. If he is elected on the first ballot of the afternoon, the white smoke would be seen between 5:30 p.m. and 6 p.m.

Converting those times into Daylight Savings Time for the East Coast[3], I came up with four times I needed to be tuned in to some webcam or live feed or at least TV news. And so I also set up reminders in the Reminders app on my iPhone.

With all this preparation what are the odds I will first hear about it from someone running into my office or that I’ll even miss it until Twitter and Facebook blow up? Nevertheless, this time I’m going to be prepared. Or I’m going to need to be glued to the TV all day.