Does campaign behind-the-scenes presage the administration? 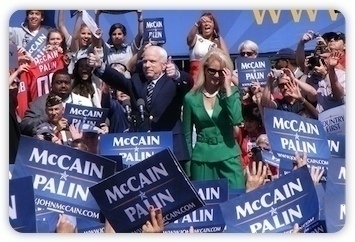 People often claim that all the hoopla that surrounds presidential elections, campaigning, and the reporting of them doesn’t actually tell us anything about whether someone would be a good president or not.

That’s why I think the reporter’s notebook from CBS News’ Dean Reynolds is instructive. While it doesn’t tell us any more about policy stances or the candidates’ characters, it does give us an idea of how an actual Obama or McCain White House and executive branch might be run starting in January.

After most of the previous 12 months covering Barack Obama’s campaign for the presidency, it was interesting, instructive and, well, relaxing to follow John McCain for the last few days. The differences between the two are striking.

Obama’s campaign schedule is fuller, more hectic and seemingly improvisational. The Obama aides who deal with the national reporters on the campaign plane are often overwhelmed, overworked and un-informed about where, when, why or how the candidate is moving about. […] The national headquarters in Chicago airily dismisses complaints from journalists wondering why a schedule cannot be printed up or at least e-mailed in time to make coverage plans. Nor is there much sympathy for those of us who report for a newscast that airs in the early evening hours.

The McCain folks are more helpful and generally friendly. The schedules are printed on actual books you can hold in your hand, read, and then plan accordingly. The press aides are more knowledgeable and useful to us in the news media. The events are designed with a better eye, and for the simple needs of the press corps. […] The McCain campaign plane is better than Obama’s, which is cramped, uncomfortable and smells terrible most of the time. Somehow the McCain folks manage to keep their charter clean, even where the press is seated.

The sense I get from Reynolds’ observations is that Obama’s campaign is concerned with treating him like a rock star and their attitude is that everyone must sublimate their needs and desires to Obama’s. On the other hand, the McCain campaign strikes me as one that values efficiency and evinces a desire to create a collaborative atmosphere.

Is this just the difference between a front-runner and a trailing candidate? Perhaps. But I’m reminded of the advice given to young men or women who are going on first dates: Observe how the date treats the waiter in the restaurant or other people who serve you. That will give you an indicator of their character and how they will treat you one day when the first rush of romance is past.

I think similar advice applies in politics: How a campaign operates in the details of daily life is a good indicator of how it will operate as an administration.