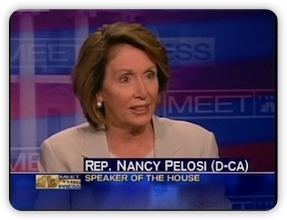 Last week, a group of Catholic congressmen from the House of Representatives sent a letter to House Speaker Nancy Pelosi, taking her to task for misrepresenting Catholic teaching on abortion in a TV interview. Here is their letter.

On the Sunday, August 24th, broadcast of NBC’s Meet the Press, you stated “as an ardent, practicing Catholic, [abortion] is an issue that I have studied for a long time.” As fellow Catholics and legislators, we wish you would have made a more honest effort to lay out the authentic position of the Church on this core moral issue before attempting to address it with authority.

Your subsequent remarks mangle Catholic Church doctrine regarding the inherent sanctity and dignity of human life; therefore, we are compelled to refute your error.

In the interview, Tom Brokaw reminded you that the Church professes the sanctity of human life from conception to natural death. As stated in the Catechism of the Catholic Church: “Since it must be treated from conception as a person, the embryo must be defended in its integrity, cared for, and healed, as far as possible, like any other human being” (2274).

To this, you responded, “I understand. And this is like maybe 50 years or something like that. So again, over the history of the Church, this is an issue of controversy.” Unfortunately, your statement demonstrates a lack of understanding of Catholic teaching and belief regarding abortion.

From the Apostles of the first century to Pope John Paul the Great “the Church has affirmed the moral evil of every procured abortion. This teaching has not changed and remains unchangeable. Direct abortion, that is to say, abortion willed either as an end or a means, is gravely contrary to the moral law” (Catechism 2271).

Thus, your erroneous claim about the history of the Church’s opposition to abortion is false and denigrates our common Faith. For example, during the reign of Pope Innocent XI in 1679, the Church unequivocally stated it is an error for Catholics to believe fetuses do not have a soul; and confirmed the teaching that abortion constitutes an unjustified taking of innocent human life.

To reduce the scandal and consternation caused amongst the faithful by your remarks, we necessarily write you to correct the public record and affirm the Church’s actual and historical teaching that defends the sanctity of human life. We hope that you will rectify your errant claims and apologize for misrepresenting the Church’s doctrine and misleading fellow Catholics.

I’m glad, but not surprised, to see the name of my friend Jeff Fortenberry there. I’m saddened that not one of the Catholic congressmen from my own state are among them.