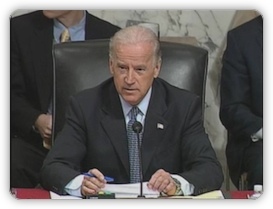 I don’t understand why reporters are so clueless about Barack Obama’s selection of Sen. Joe Biden as his vice-presidential running mate, vis a vis Biden’s attraction to Catholic voters because himself is Catholic. Did they learn nothing from 2004 and John Kerry?

Steven Waldman, the editor-in-chief of Beliefnet, writes on The Huffington Post that Sen. Joseph Biden of Delaware, a pro-choice Catholic, is a smart pick by Barack Obama in terms of religious politics.

Obama, he writes, “desperately needs to retain his lead among Catholics,” many of whom are still upset at John McCain for his fleeting embrace of John Hagee, the Catholic-bashing televangelist from San Antonio.

I doubt Hagee’s anti-Catholicism will outweigh Biden’s pro-abortion stance. For those whose self-identification as Catholic affects the way they vote, which is the group they’re so hot to capture, the selection of a reliable pro-abort—which Biden is, even if he’s not as rabidly bloodthirsty as Obama—is still not going to endear him to Catholics. While Waldman writes that the selection could backfire because it will keep the question of whether pro-abortion Catholic politicians should receive Communion front and center throughout the campaign, he seems to want to ignore the problem, as if wishing it away will work.

In other words, he’s Catholic enough to appeal to Catholics, pro-life enough to avoid some Church attacks, and pro-choice enough to satisfy Hillary voters.

That’s a load of malarkey that only someone who is being willfully blind could believe. What we will see is that instead of being palatable to all, he will be palatable to none. If he’s pro-choice enough to satisfy the Moloch-bloc of the Democratic Party, then there’s no way he can be described as pro-life.

And speaking of the Communion controversy, Ed Peters weighs in early with his take on Biden in relation to the canon laws on reception of Communion. Specifically, he approaches the question of whether the strictures of canons 915 and 916 apply to Biden.

In regard to the Catholic Joseph Biden’s eligibility to receive holy Communion, then, the right questions will seek to answer whether certain of his public actions (chiefly legislative actions and public advocacy efforts) constitute obstinate perseverance in manifest grave sin. Answering those questions well will require (1) accurate assemblage of the facts (an area for which expert lay Catholic observers of American politics should be consulted), and (2) accurate inquiry into the requirements of Church law and moral teaching (an area for which bishops are chiefly responsible).

I have little hope that the secular media will engage in due diligence in this area and we’ll be subject to the same nonsensical reporting on the Catholic faith’s relation to politics that we saw in 2004. Still, it’s up to Catholics of all kinds to keep approaching this subject rationally and in good faith and not let politics be the only concern here. For at least Biden, but also for those who might support him, the questions have an eternal consequence.

Photo: Official US Congress photo in the public domain.