Better iPhone Audio for My Commute 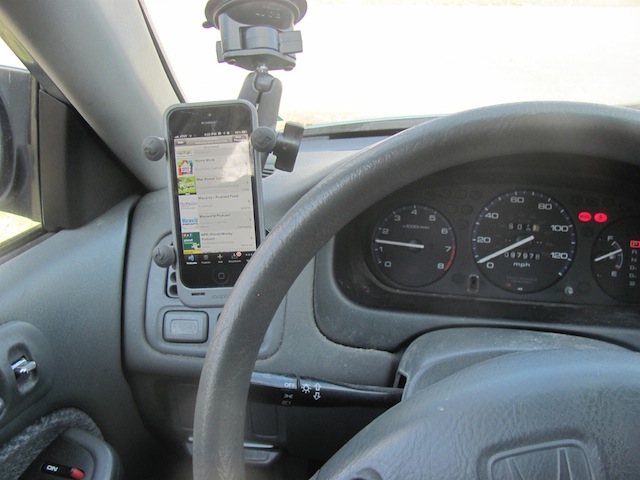 I used to spend a lot more time in my car each day than I do now. When we lived further from my office, I would spend an hour in the morning and as much as two hours in the afternoon commuting back and forth to work, but now we’re just 15 minutes from work and perhaps 30 minutes when there’s traffic.

How does one stay sane while sitting in the car all that time? I know that most people listen to the radio, but I get bored by that. I prefer podcasts, lots of podcasts of many types, from economics to politics to general interest to Macintosh to productivity to, of course, Catholic. Because I have an older car, a 2000 Honda Civic, my options for playing the podcasts have always been somewhat limited. Back in the beginning, I connected my iPod–and later my iPhone–to a cassette adapter to play them through the car’s stereo. But that’s always been a second-best option and more so now since the stereo’s speakers are really going and sound awful.

So I thought I’d share a little of how I make listening to audio in my car work today. It all starts with the iPhone and an app called Downcast. (I wrote about Downcast a couple of years ago.) I have it set to download update my list of podcasts each day automatically before I get in the car. It does it again when I leave work through the use of the iPhone’s built-in geofencing features that Downcast accesses. 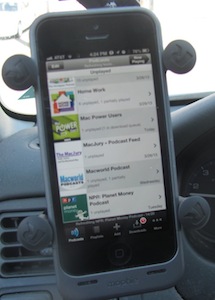 Rather than leave my iPhone sitting on the car seat where it can slide all over the place when I’m driving around, I use a mount to keep it in place and at hand. There are all kinds of iPhone mounts available on the market. Some of them clip to your air vents, but I’ve found that blocks the air and you can redirect the air flow. Others go in your cup holder, but then you’re out a cup holder and plus my cup holders are in an awkward location. Most either attach to the dashboard or to the windshield via suction cups. I’ve had back luck with those, mainly because the suctions cups refuse to stay attached, especially when it’s either very hot or very cold out. But I’ve finally found one brand that works very well.

RAM Mounting Systems sells a complete line of mounting products to all kinds of customers, including police forces, and they can mount anything in vehicles from laptops to fishing rods to GPS’ to phones and tablets. There are a couple of options, but the best one is the Universal X-Grip, [Amazon link] which has two spring-loaded arms that will grip just about any phone, whether or not it’s in a case. The way RAM Mount works is that you choose the working end that holds the device and then select the other bits and pieces that make it work for your car. In my case, I got two articulating ball-and-socket arms and suction cup window mount. (You can also get bicycle arms mounts, plates for attaching to surfaces with screws, and arm that attaches to the passenger seat frame rail and more.)

I know I said suction cups have not worked for me in the past, but this one is different. This is one tough and durable and solidly built suction cup. It’s not perfect, but it stays attached long after lesser suction cups have refused to stay attached. If you haven’t experienced the fun of your phone falling off the windshield at your feet while driving on the highway, let me tell you that you haven’t lived. As long you keep the windshield glass clean under the suction cup, you’re good to go.

I keep the iPhone mounted just to the left of the steering wheel, close enough that if I reach out with my pointer finger from the place I normally keep my hands on the wheel, I can operate the phone quite easily. This has been great and keeps distraction to a minimum. 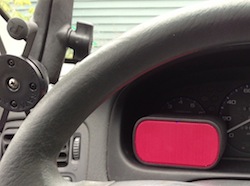 Because I don’t use my stereo for playback, I need something other than the phone’s built-in speaker to listen. I used to have a small cheap speaker that connected via a headphone cable, but the cable was so short that it made keeping the speaker in a convenient place difficult and it just didn’t sound very good. So I moved up a little bit to a Bluetooth speaker, specifically the Logitech UE Mobile Boombox, which not only works as a speaker, but also as a speakerphone. This has been a rock-solid addition. The battery life is great, going weeks before needing a recharge and setting up the Bluetooth was very easy. If there’s any negative about it, I could wish it could go a littler louder because when I’m driving with the windows open the wind noise can drown out some of the speaking voices in the podcasts.

I keep this right in front of me on the instrument cluster, in front of the tachometer. Since the Honda is an automatic, I never look at the tach anyway. And because it’s Bluetooth, I no longer have a dangerous headphone wire snaking around and through the steering wheel to potentially get tangled. 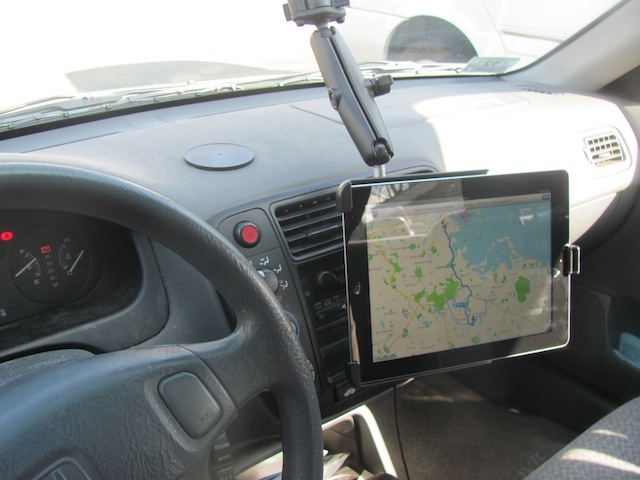 Finally, I did also get a RAM Mount for my iPad. There have been times when I wished I had a larger display for, say, Maps when navigating to a new address, and so being able to mount my iPad in view is very useful. The mount I got isn’t available anymore and that’s probably for good reason since I ended up breaking the mount while trying to get my iPad in and out of it, which is better than breaking the iPad, I guess. They’ve since re-designed this style and at about $20 on Amazon it’s a good deal, but they’ve also recently added a version of the X-Grip, which should work beautifully but costs three times as much at $66 on Amazon! (There’s also a $20 X-Grip for 7" tablets. The cost of having being popular.)

Keep in mind, as well that you need to add in the price of the other components, so you’re looking at about $50 total for the mount. It sounds like a lot I suppose, but when you’re in your car every day, how much are you willing to pay for your sanity and for the safety of not blindly flailing for your phone that fell off the windshield or slid off the seat?

In any case, this setup make at least my comute at little more pleasant every day.

Raising the Betts #155: A Night at the Ballpark

Raising the Betts #154: Persistence in Prayer

Raising the Betts #151: Lambs Before Wolves