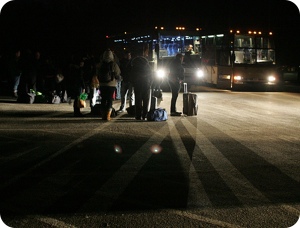 Tagging along is my colleague, George Martell, a photographer who will be documenting the pilgrimage the whole time. The best part is that he and I have put together some technology that allows him to have the photos available online within one minute of taking them. This allows those of us who couldn’t go—as well as the families of those who are taking part—to travel along virtually, seeing everything they see almost instantaneously. This is unprecedented, I think. I don’t know of any media organization, never mind diocese, that is

How did we do this? We put together two pieces of technology that allow us to take the photos from George’s camera and transmit them wirelessly over the Internet from any location that has a cellphone signal.

The first piece of tech we’re using is the Eye-Fi memory card. This is just the standard SD memory storage card that’s probably in your own digital camera except that these geniuses at Eye-Fi have figured out a way to cram a WiFi wireless access card in there too! (That’s what allows your laptop computer to connect to the Internet without a network cable.) The Eye-Fi card also has the smarts to upload certain photos that you choose whenever it’s near an Internet wireless hotspot and to upload them to whatever service you want: email, Facebook, Flickr, Twitter, YouTube (if you’re taking video), and more.

That’s great if you know you’re going to be near a publicly accessible wireless hotspot, like a cafe or library, but that won’t give us the near real-time photos we’re looking for. You never know when you’re going to find a hotspot.

That where the second piece of tech comes in: the Verizon MiFi. This nifty gadget is about the size of an iPod nano and can fit in your shirt pocket. What it does is acts like a mobile wireless hotspot. Up to five computers or other Wifi devices can connect through it to the Internet using Verizon’s data network, the same network that allows smartphone like the Motorola Droid to be little Internet-connected computers.

So, as George walks down the streets of Washington, DC, with the MiFi in his pocket and Eye-Fi in his camera, his photos will upload to the Internet automatically and be posted to www.flickr.com/BostonCatholic within a minute. Once it’s there, I will put on proper titles and a caption, tag it, and drop it in a set. Over at www.facebook.com/BostonCatholic, that page is automatically grabbing the photos, butI will also be sending out manual updates to fans, alerting them of new, interesting photos. And we’ll also use Twitter as a means of providing even more updates.

Like I said, I don’t think anyone is doing anything like this and I’m very excited to be part of this. I’m also looking forward to other applications of this technology in the future.

Ten years ago, my brother John lead a pilgrimage from Boston to World Youth Day 2000 in Rome and on that trip we were also on the cutting edge of technology, taking photos each day, rushing back to the hotel at night, creating web pages by hand and uploading photos so the families back home could follow along. This is the natural extension of that project, except now there are tools in place to take a lot of the extra work and hassle out of it, while also making the whole enterprise nearly instantaneous. I love living in the future.

Caption: Pilgrims waiting for their buses this morning to take them to the March for Life.
Photo copyright by George Martell, The Catholic Foundation. Used with permission. flic.kr/p/7xhED2