Here’s a very interesting tidbit from the John Jay report. The percentage and number of incidents of abuse by priests against girls and women remained fairly steady from 1950 to today, but the number and percentage of incidents of sexual abuse by priests against males rose rapidly from the early 1960s, peaking in the late 70s, and finally dropping quickly, but not to the original 1950s level, in the 90s. Hmmm, what could account for that?

Remember, we’re not supposed to go on a witch hunt or look for scapegoats.

Update: Here is a graph from the report that illustrates what I’m saying. Note as well how the number of cases of abuse against females actually drops, not stays steady. 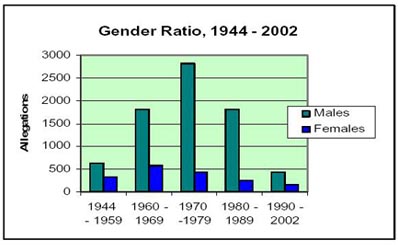