All aboard the USS Constitution 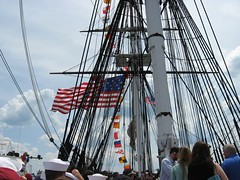 What a fantastic day! I’ve uploaded my set of photos to Flickr. A YouTube video of the 21-gun salute is also available.

For those of you joining me late, my dad gave me the coolest gift, which was to sail aboard the USS Constitution during her annual July Fourth cruise around Boston harbor. He is friends with a former captain of the ship, who gave Dad his own tickets. My dad knows what a nut I am about old ships and so he invited me to go.

I met my dad at the boarding line about 8:30 am at the Charlestown Navy Yard. Everyone in the line as well as the whole crew were very excited. We quickly learned that the day would include an assisted sail (the Constitution does not sail under her own power anymore, but must be assisted by tugs) out to Castle Island in South Boston and back. We would have several admirals aboard as well as several ship captains and a group of people becoming naturalized citizens during a ceremony while underway.

We were pretty much given the run of the ship and explored a bit. The crew was helpful and friendly and snappy in their period uniforms. In a bit of an anachronism, the crew has both men and women, but they all looked very young. (I’m getting so old.)

For the occasion I wore my USS Ronald W. Reagan, CVN-76, hat to honor our nation’s 40th president and the Navy. My dad, a Navy veteran of the Korean War era, had his Navy hat. We calculated that it had been more than 50 years since he mustered out of the service. More than one sailor he talked to thanked him for his service to the country.

The ceremony was properly full of ritual and pomp. The Navy Band played the classics, like “Washington Post” (if you don’t know the name you recognize the tune from the last graduation you attended probably) and others.

Highest honors to our heroes