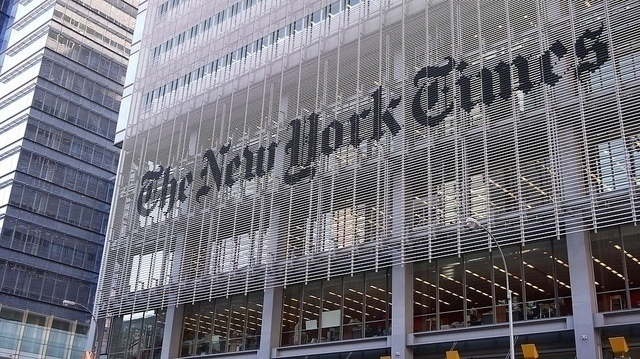 [lead dropcap="yes"]What can social media lessons from the “newspaper of record” teach those of us involved in social media for Catholic dioceses, parishes, and ministries? Quite a lot actually.[/lead]

Earlier this year, Fast Company published a list of “5 Twitter Lessons The New York Times Can Teach Your Social Media Team” and with a bit of insight and a little bit of broad thinking they provide some valuable lessons for the rest of us. While they’re originally written from a newsroom perspective, they can be universalized. Here they are:

Let’s start at the top. Certainly, Catholics should know as well as anyone that the human touch is paramount, given the Church’s constant refrain about the dignity of the individual person. But it’s also about the compassion and intelligence and insight that a person can bring that no algorithm can ever.

The example from the New York Times involves a function that autotweets headlines. In this case, the original headline “The Rock ‘n’ Roll Casualty Who Became A War Hero” was tweeted and then a human editor tweeted a link to the story again, but with a new text to accompany it: “He got kicked out of both Nirvana and Soundgarden. Then he became a war hero.” The latter got many more hits than the original because it was a much more human-friendly sentence.

Similarly, the Rome-based video news service Rome Reports posts its videos to YouTube, often with generic descriptive titles and they usually get a few hundred views. But once in a while their titles break the mold such as “Hello, this is the Pope … Francis Calls Carmelite Monastery”, which got 4,800 hits. Of course, content always trumps headlines as we see with a later video entitled “Pope Francis prays at the shrine where the first Korean priest was born”, which received 45,000 views despite a rather pedestrian title. Still, in general, a bit of thought and rewriting will do well for your tweets.

The second lesson is to “rely on reporters to help curate the news”. Parishes don’t have reporters but they do have priests and lay ministers. The New York Times has an official Twitter account that acts as the official source for all the newspaper’s stories, but individual reporters and editors have their own Twitter account. Those individuals frequently break news or provide on-the-ground color that the main account can re-tweet. That helps the main account provide good content without linking to a story on the main site, while the invidual gets the exposure and cachet from the Time’s retweet to it’s large audience.

Parishes and dioceses could do likewise. For example, when the parish sends a group to World Youth Day, the main account can selectively retweet the best content from the youth minister leading the pilgrimage and even the pilgrims themselves. That way the parish gets the benefit of new, compelling content while being selective about what to share. (We don’t need every selfie that 16-year-old pilgrim took with girls from every country represented at WYD.) Like the newspaper, the parish gets to stand on the credibility of the individuals it’s retweeting.

The third lesson is to have protocols in place for breaking news because when something important is happening newspapers have competing needs to get information out fast, which is what Twitter is good for, while also ensuring that the information is correct. Parishes don’t always have breaking news, per se, but they do hsave critical information that needs to be disseminated both quickly and accurately. If there’s a snowstorm and there’s a change to the Mass schedule or religious education schedule or a dinner is postponed, that information has to get out, even if it’s after hours on a Saturday night. Whose job is to send out that information? Are they on call 24/7? If the director of religious ed calls the person responsible for the Twitter account to ask them to make an announcement, does the social media person need to clear a change in schedule with the pastor? Should they make sure other staff members are in the loop before the public is informed? If a parish has mutliple Twitter accounts (main account, pastor, youth minister, etc.), how do you ensure that everyone is disseminating the same information?

These are all questions that should be asked before it’s crunch time so they can be considered rationally and coolly and when all the participants can be asked for their input. Formulate a policy, make it known to staff, and then review it occasionally to make sure everyone knows what to do.

By the way, this is the place to point out that if you use scheduled social media updates, using a tool like Hootsuite, when something happens be ready to turn off the flow of auto-tweets. You don’t want happy, chirpy tweets to be posting from your account in the aftermath of a national tragedy. In April 2014, I was in charge of the social media accounts for the Archdiocese of Boston. When the Boston Marathon bombing occurred, it was a state holiday and I was at home with my family. As soon I saw the news, I got on Hootsuite and suspended all automated tweets. Then as news trickled in, I posted measured updates such as open-ended calls for prayer, and avoided using inflammatory language like terrorist attack until there were official confirmations of events. When you tweet from an organization’s account, you are its official voice, so be careful.

The fourth lesson is that the standard pun-riddled or stilted headlines that work in print don’t always work as tweets. Writing for the digital context isn’t just about figuring out how to write your message in 140 characters, but it’s also about providing clarity in whatever space you have. On Twitter, too much cleverness can result in misunderstandings, hurt feelings, or just disinterest in your tweet. Be clear, be clever to a point, but if you’re linking content, let the reader know as quickly and transparently as possible why they should click.

The final lesson is to repeat yourself. As they say in the article, even the most addicted Twitter user isn’t on 24/7 and if they’re following more than just a few people then their timeline is usually too crowded to go back and read everything since the last time they were on. Thus it can be useful to repeat tweets and to vary the times of day and days of the week you send them out. If you have a big event coming out in four weeks, post a link this Tuesday at 2:30pm, then again next Wednesday at 6pm, then the following Thursday at 9am, and so on. And be sure not to miss the weekends. You may not be working, but that’s when a lot of people have the time to read Twitter and when they may be thinking about church-related matters. That’s where scheduling tweets à la Hootsuite comes in.[1]

Of course, that’s not an exhaustive course in how best to use Twitter in a Catholic context, but those are five good lessons that a very large and old media company can teach us. What other lessons should we take from them or from anywhere else for that matter? Please contribute your lessons either below or on social media links to this blog post.