[lead dropcap="yes"]It's another major anniversary for my blog this weekend. July 3 marks the 15th anniversary since I began this project, two months before 9/11 and 6 months before the clergy sex abuse scandal broke open. As I said 5 years ago:[/lead]

The first six years of my blog were marked by lots of personal commentary and news analysis of that scandal, especially as it related to the Archdiocese of Boston, which gained for this site a loyal readership to whom I am still grateful. To this day, I still encounter people online and in person who tell me that they have enjoyed my writing over the years.

The next seven years saw the blog go somewhat quiet as working for the Archdiocese of Boston meant I could no longer write about the controversial topics I once did. But that restriction began to relax in my last job in the collaborative in Walpole and now I am unrestricted in my selection of topics. Plus the redesign of this site, accomplished somewhat recently, has given me new ways of linking and commenting with shorter posts, which is interestingly like the way I posted in the early days.

It's funny to think that this blog has been in constant operation from before I even met Melanie, before our five kids were born. Kids who were born that summer are in high school now! When this blog was started the New England Patriots had never won a Super Bowl and the Red Sox hadn't won a World Series since 1918!

N.B. Back in the pre-decade-old years of the blog, I didn't do elaborate posts like to mark the anniversary, but here's the big 10-Year-Anniversary post and the tiny 5-Year-Anniversary mention, as well as the very first post I ever made. 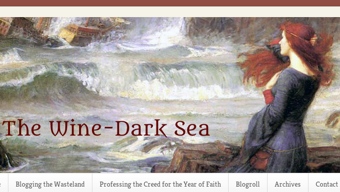